Back to Index Page

Wiring LED strip seems simple but becomes more complex the longer the length becomes. Before we talk wiring though, take a look at my article about 12v vs 24v LED strip. In the following diagrams I will be talking about 24v LED strip only, when using 12v take into account that the maximum lengths mentioned should most likely be kept shorter, the same goes for very cheap LED strip! On the other hand, high quality LED strip at 24v can often be made longer then the stated 2.5m.

While following below guides, please make sure not to exceed the calculated power limits for the board and individual ports! And last, after reading the below wiring diagrams please also take a look a the wire thickness needed page to determine what thickness cable you require for your desired lengths and application! Also remember to provide proper cooling for your LED strip!

Connecting a single strip it’s best to use the following terminals: 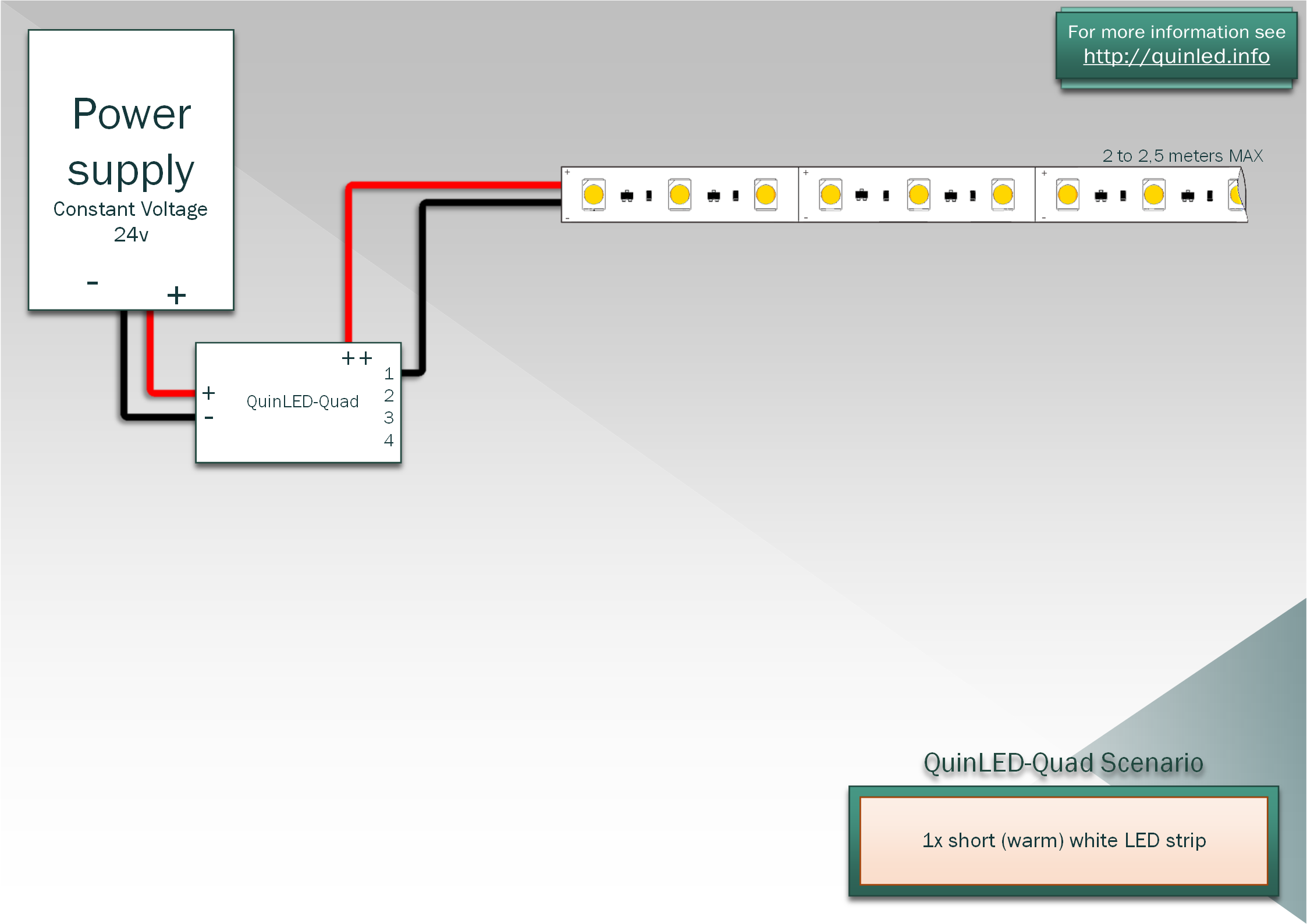 If you wish to connect multiple white LED strips you basically build on the above scenario. All Positive + (Red) lines are shared, negative – (Black) uses a unique port per strip to allow per strip light level control. Using the QuinLED-An-Quad this can be done for 4 white LED strips. All +  (Red) terminals are shared so you can make 2 connections into a single terminal block if hooking up 4 strips. The following diagram shows how to connect two strips: 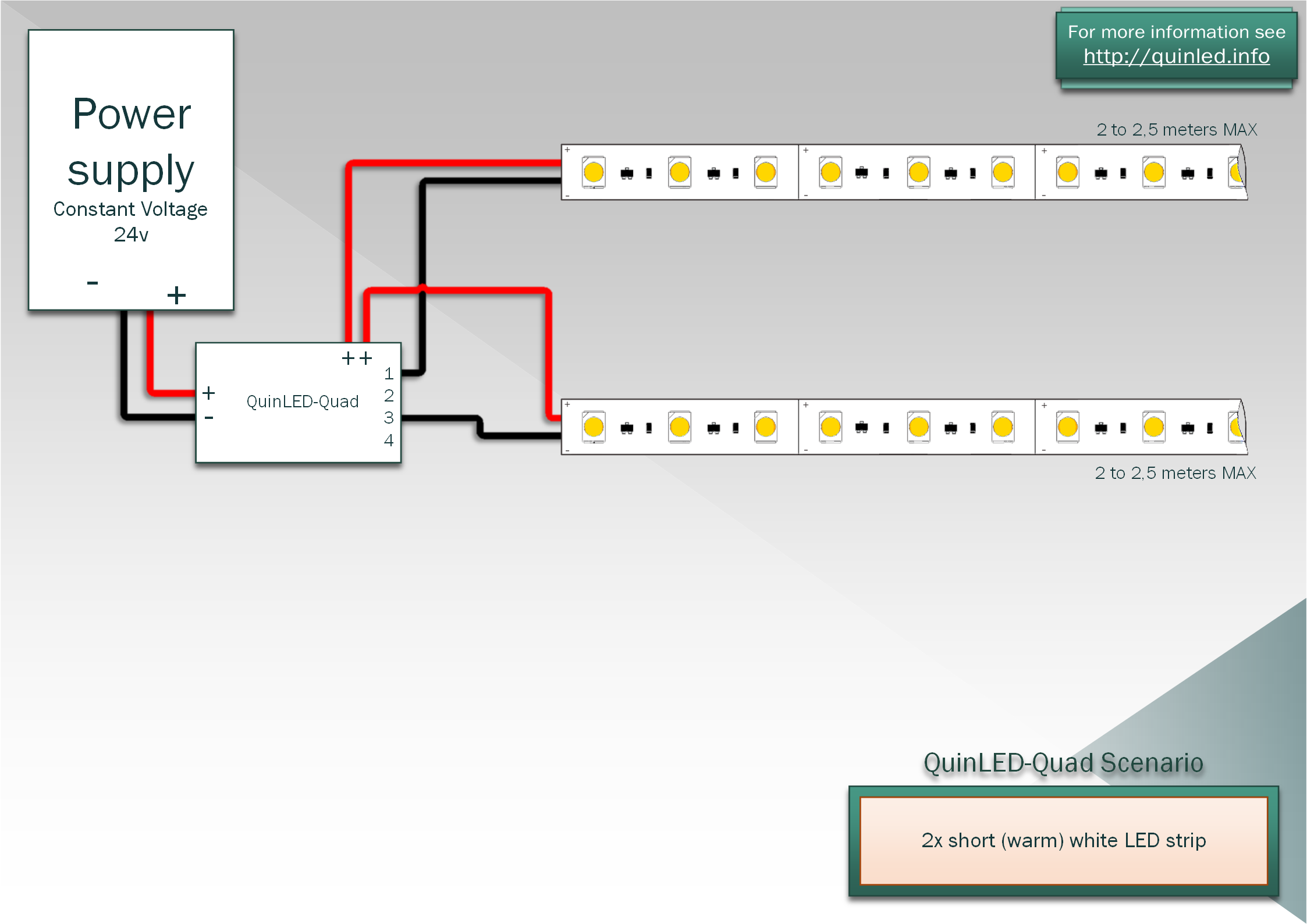 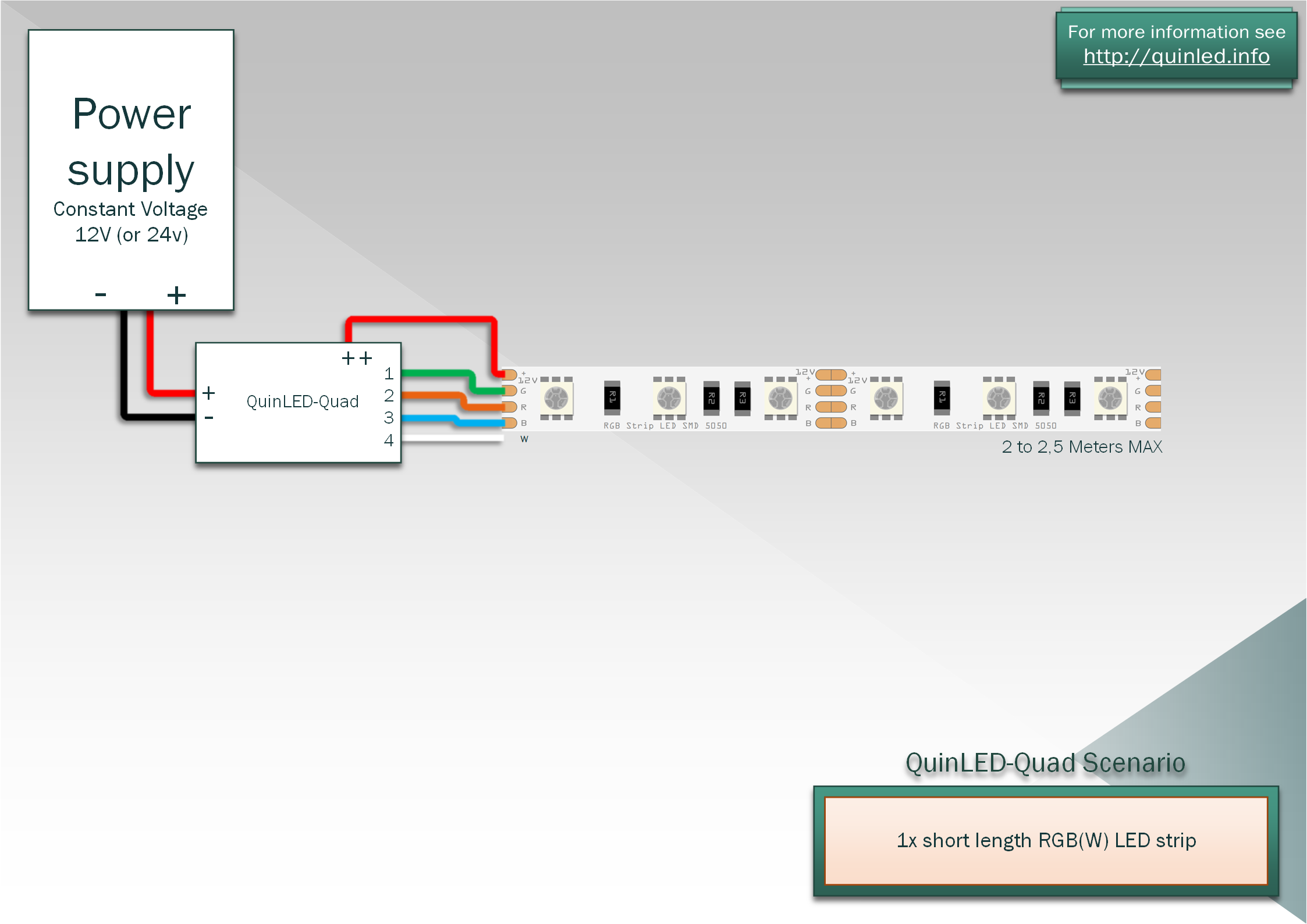 Although hooking up a 5m strip directly to the QuinLED is technically no problem, in most cheap 12v strips the voltage drop becomes so high that a very visible fade off shows at the end of the strip. Most often this effect is not desired. This is what these advanced diagrams are for. If you are not bothered by this, are using a high quality LED strip or want to try only feeding the strip from one side, there are no dangers in doing so. These diagrams show you the smartest way to solve this issue while still using a single controller to hook up longer/more LED strip. Most of my LED strips I only single feed, but often they are not longer then the 2,5m specified in the diagrams.

All of this looks complex in the drawings but mostly isn’t in reality!

For more complex situations, consider using multiple shorter segments instead of 1 large segment. Because everything is linked through Domotica, sending a command to 1 long strip or the same strip split into 4 parts takes just as much effort!

For some configurations you have too many wires (or to big) to fit into the two available + (Red) terminals. You can fix this by using an external connector block. You can make two (thick) short wires, connect this into the connector block and then connect the 4 + (Red) wires of the LED strips into the same connector block. All + (Red) planes are shared so can be connected together in this way, do NOT do the same with negative (Black) connections! You can find these blocks in the Tools and Equipment article. The 5 pin variant works well for this.

For very long LED strip sometimes you will need to connect 2 or more – (Black) wires into the same terminal. For these cases you can again use a connector block (per output!) but you should also consider splitting the strips in multiple segments, at some point you are going to overload a single channel in regards to power output while the board could handle more if the load is split over multiple channels. 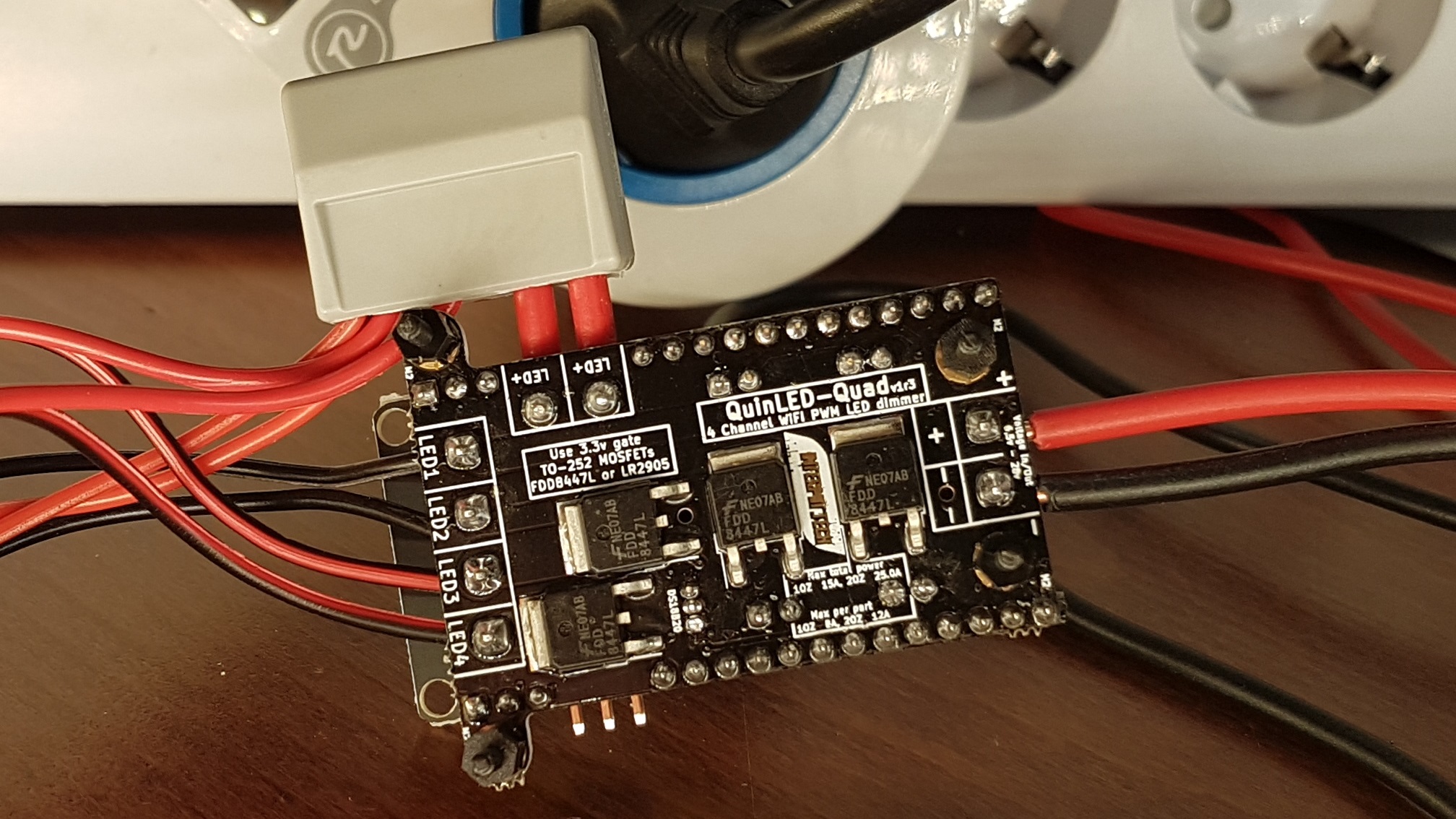 Medium length is considered to be up to 5m or ~16 feet. There are generally two ways you can hook this up, either by double feeding (both ends of the LED strip) or by middle feeding. In both cases power only needs to travel a maximum of 2.5m through the strip and voltage should not drop off too much.

*When double feeding an LED strip you can halve the amount of current each cable needs to transport and thus use thinner wires then when middle feeding the cable! Please see this article to learn more about the thickness of the cable you need! 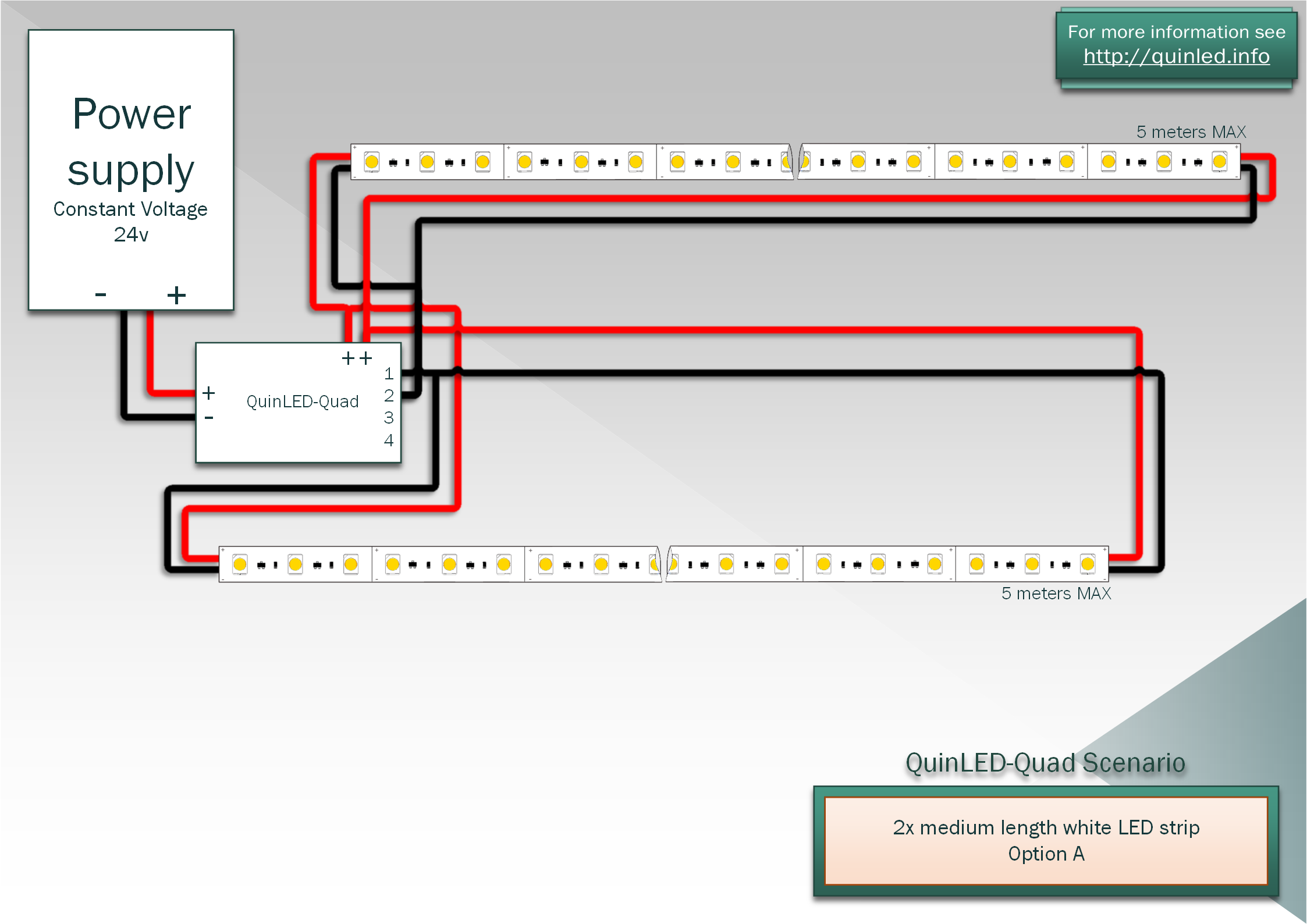 The scenario shows 2 LED strips which are both double fed

If you want to use less wire and don’t mind soldering some new connections to the LED strip, middle feeding is a great option: 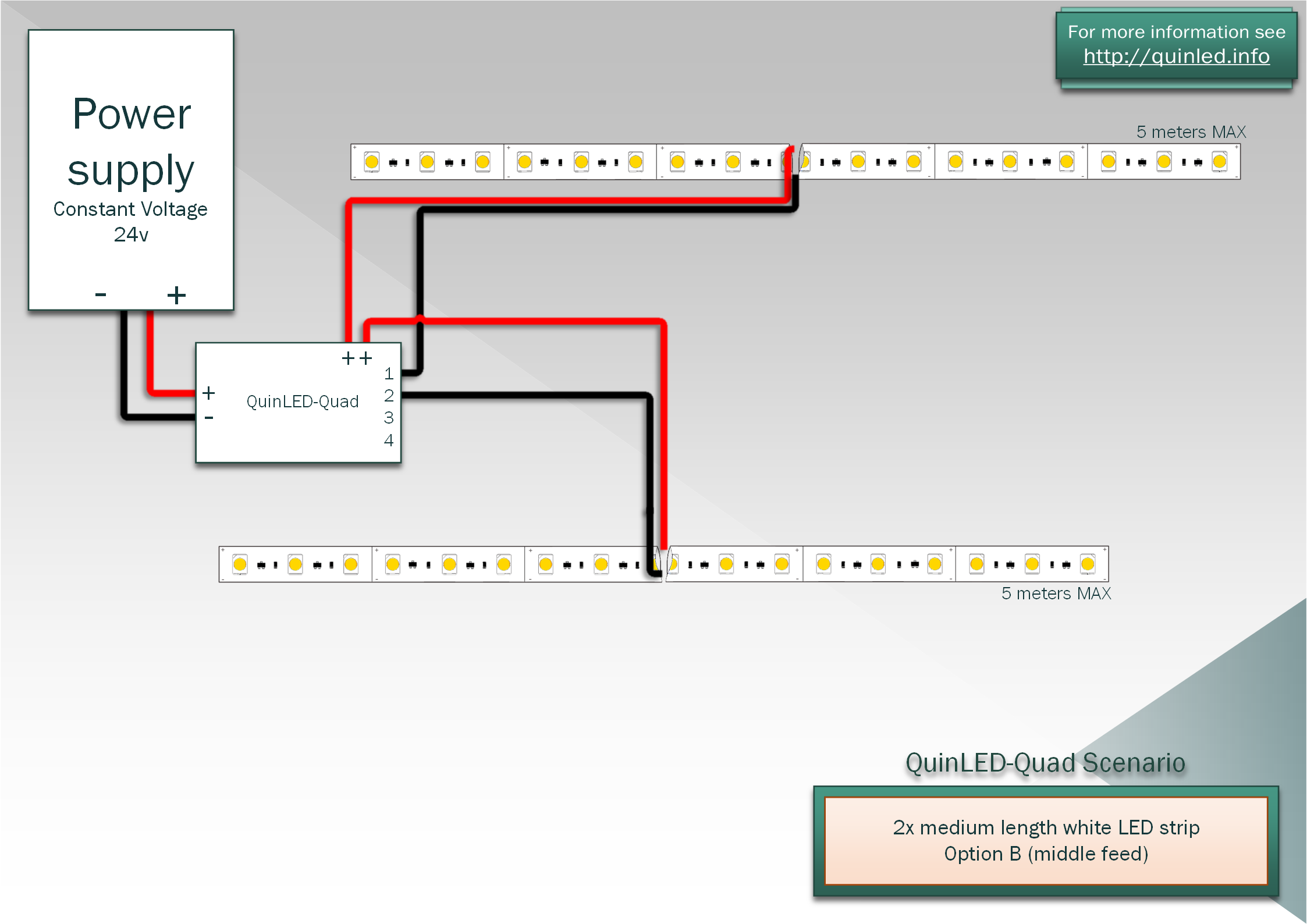 Hooking up a 5m RGBW strip basically works the same way as hooking up a white LED strip, there is just an extra wire per color to think of. Again you have the choice to either double feed them from each end or to do some soldering and middle feed them. Below diagram is for middle feeding the strip since it uses the least amount of wires. 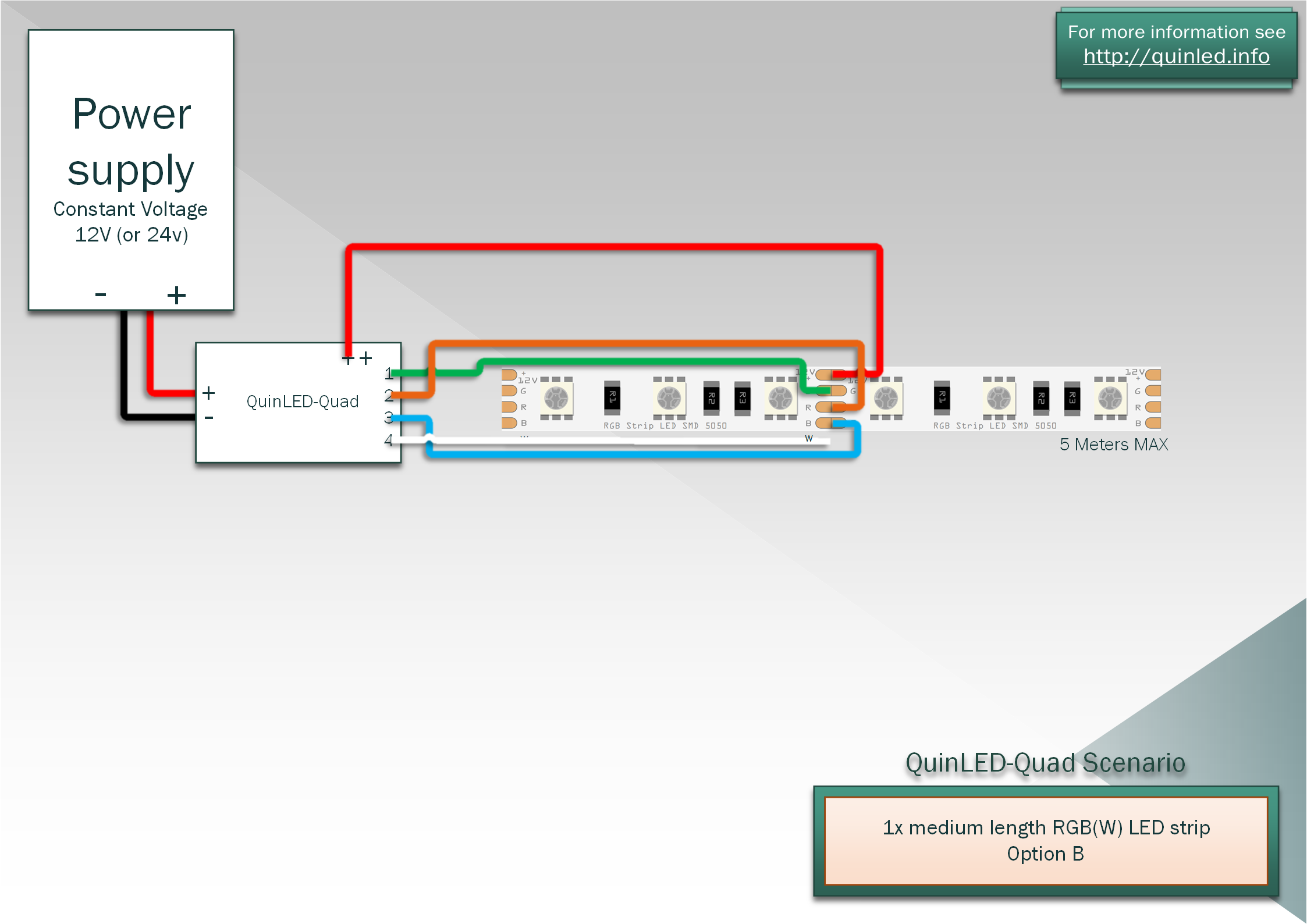 If you wish to run more than 5m LED strip you are going to need to do some serious cable work to get all the power to go to where it needs to go without too much resistance running everything through the LED strip. Below is an example of a 10 meter (32 feet) RGBW LED strip which is fed using three points. This way the maximum distance power needs to travel is again a maximum of 2.5m through the strip which should be ok for most strip (especially if using 24v). This diagram looks quite complex but in reality the wiring it simple, there is just a lot of it! 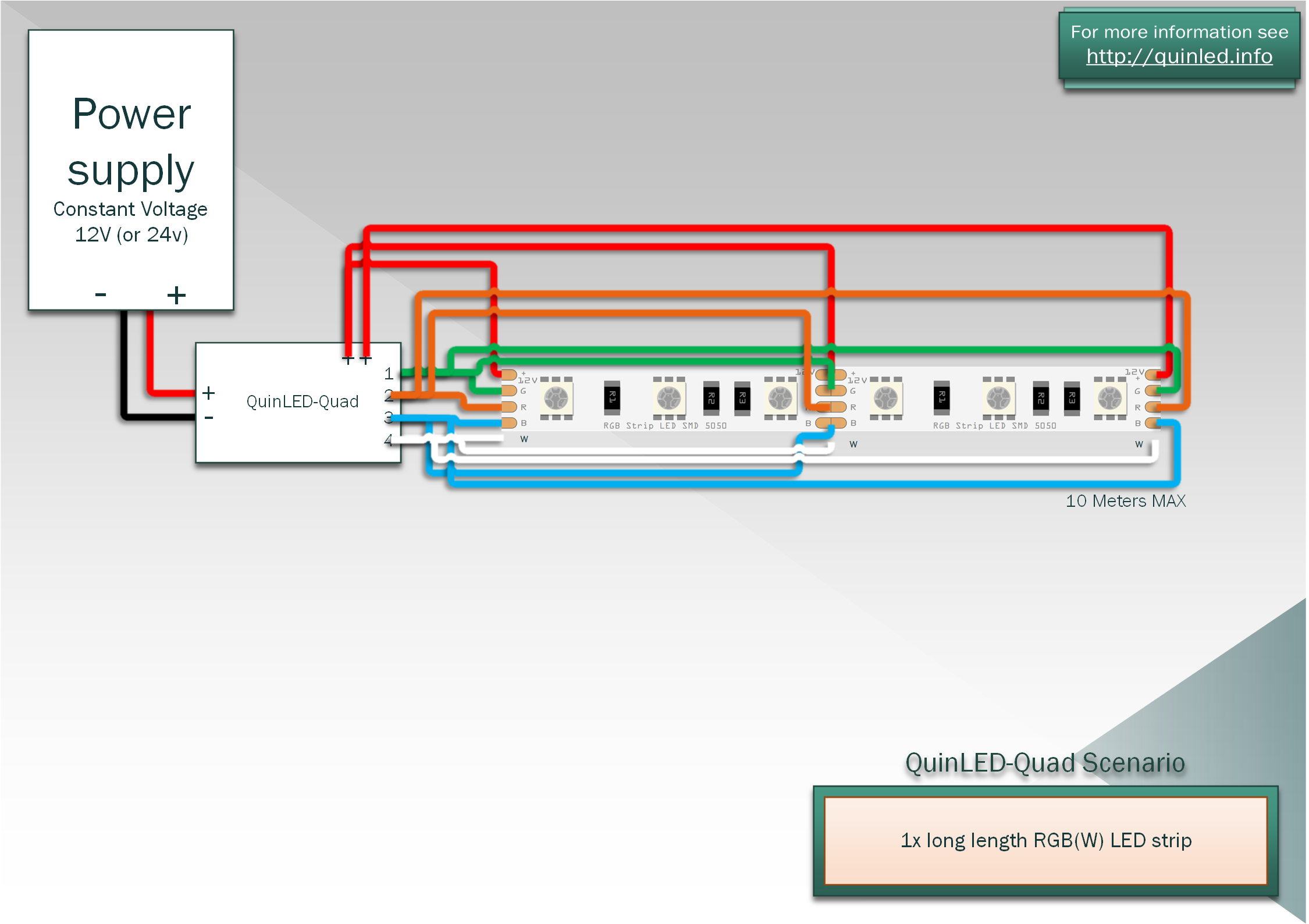