Another way to use the QuinLED-Dig-Uno is using it to run a digitally addressable LED strip or panel controlled remotely using the E1.31 protocol. That means that you can design patterns and effects on your PC in software (such as xsplit or vixen) which are wirelessly transmitted in real-time to the QuinLED-Dig-Uno and displayed on the connected LEDs! A lot of christmas displays are run in this manner, although after a certain complexity you might not want to keep using wireless connections because those are limited in capacity. For a few strip or displays it works great though and you can use one or more QuinLED-Dig-Uno’s to do this!

This is not only suitable for Christmas displays either, I’m planning some projects in my home and even something more special, but more about those in the future. Let’s just say the uses are very broad!

Check out the following video with some effect demonstrations:

To accomplish all of this we are going to need to run certain software on the PC and on the module. On the PC I’m going to focus on using software called xlights. There is other software you can use such as Vixen but it comes down to use preference.

To start, download the latest release of the ESPpixelstick firmware here. Unpack the zip file and in there, there should be a java program called “ESPSFlashTool.jar”. Double click that to install the firmware. If you can’t execute the file, check to see if you have Java RunTime installed or otherwise download and install it here. If it runs successfully you should see something like this: 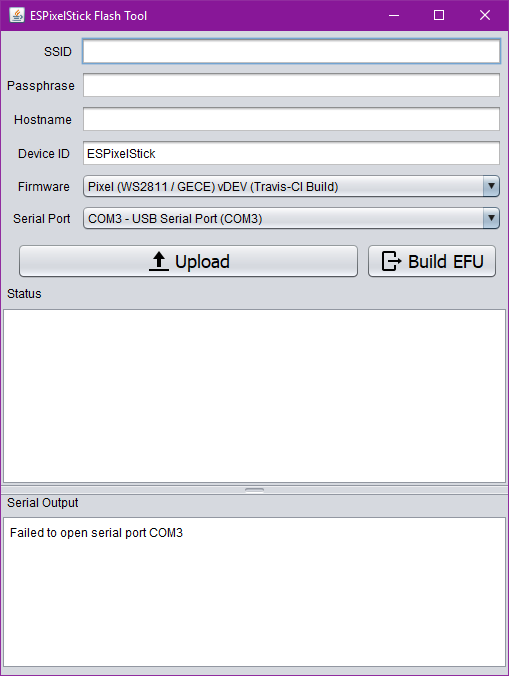 Once that is running we need to prepare the ESP8266 module. Currently this software is only compatible with an ESP8266 (Wemos D1 Mini) on the QuinLED-Dig-Uno, there is no software available yet for the ESP32.

Once you have the module in hand make a connection between GND and D3 using some Female-Female dupont wires. This makes sure the ESP8266 module boots into flash mode: 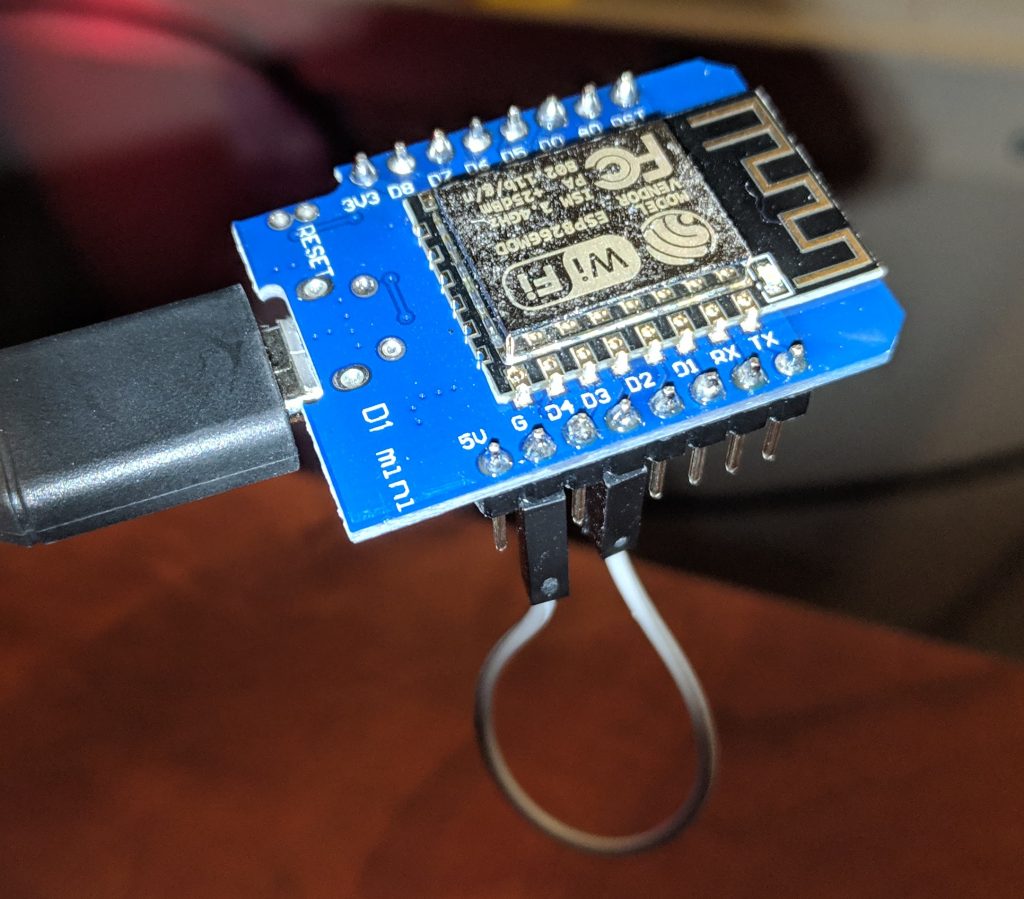 After this, connect the module to a free USB port and restart the software program.

After restarting the software you should be able to select the COM port that has “CH340” in the name. This is the serial chip the Wemos D1 Mini modules use.

Fill in the rest of the details to match your network and it upload, that should look a bit like this: 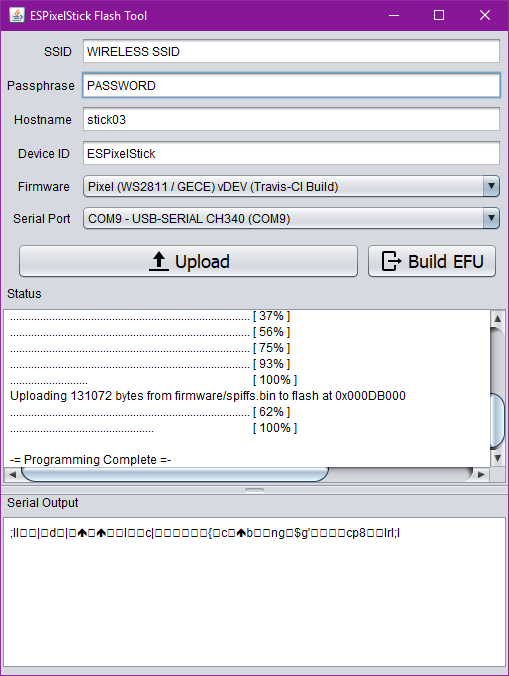 There are two last steps, first is configuring the amount of LEDs connected to the module, in my case that’s going to be 144. You can configure this in the configuration page like so: 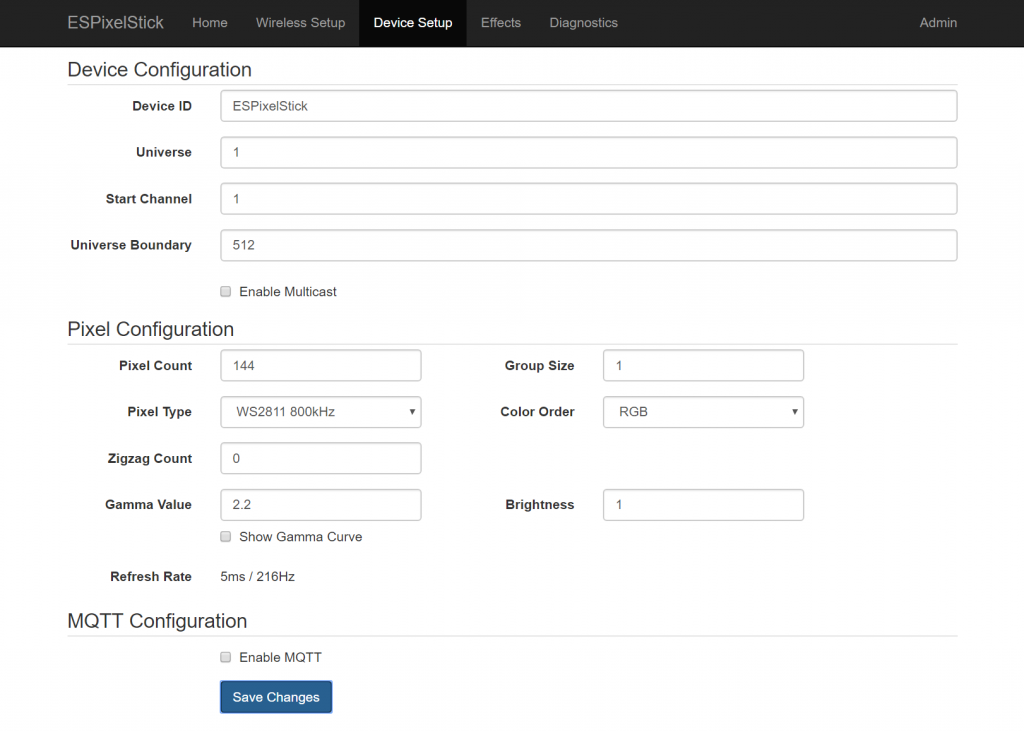 After this the last step in configuring the QuinLED-Dig-Uno hardware and Wemos D1 Mini module is making sure the GPIO Jumper (yellow) is in the left (GPIO2) position like so: 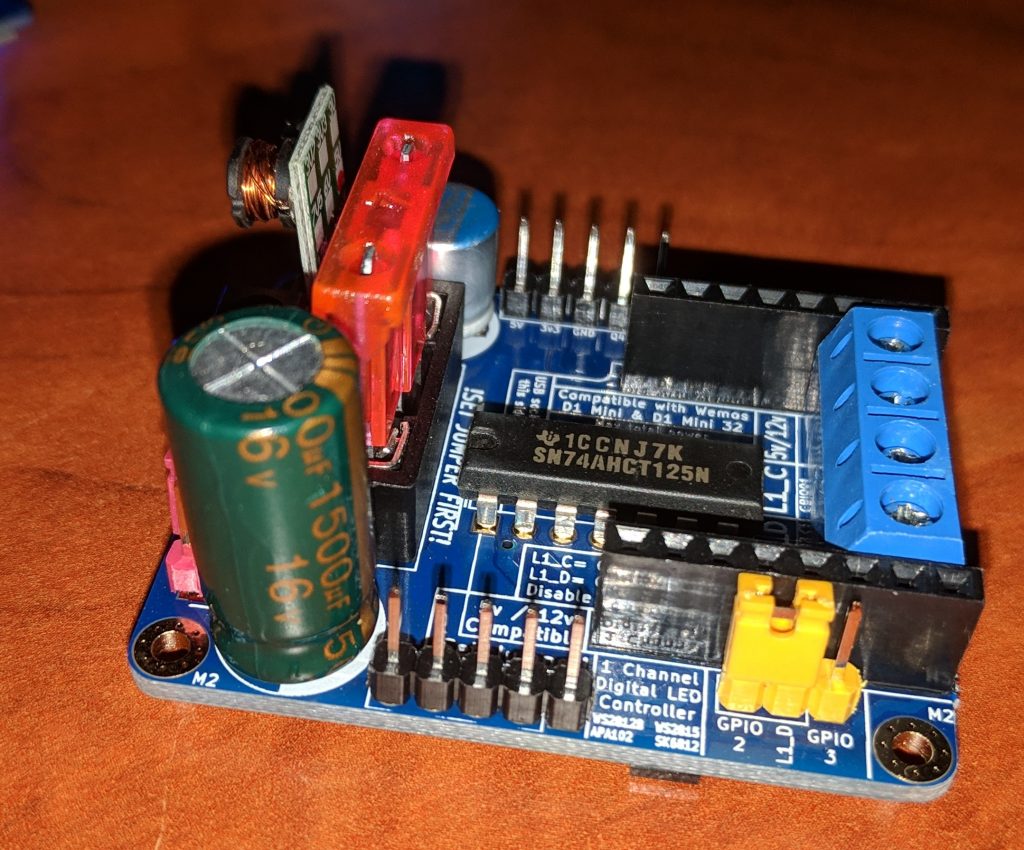 Now that the QuinLED-Dig-Uno is running the ESPixelstick firmware and is configured the next step is to download and install the xlights software on your PC, you can find it here. The install itself is very easy, you can just accept all default settings! You might see a pop-up appear which looks a bit like this: 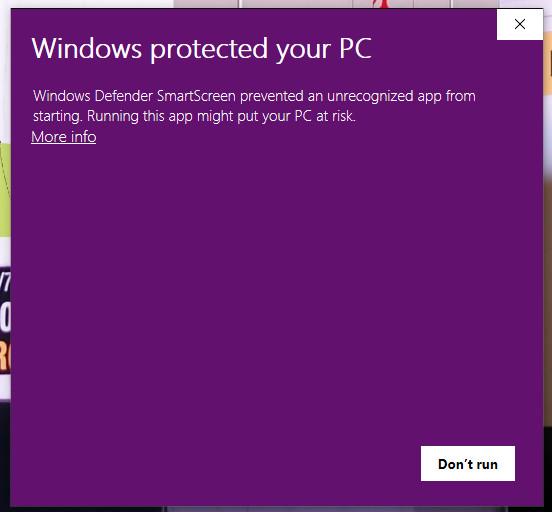 Just click on “more info” and hit “run anyway”. Since xlights puts out regular builds, not all of them are signed with Microsoft, the software is safe to use though! Once past this point you’ll see a screen like this: 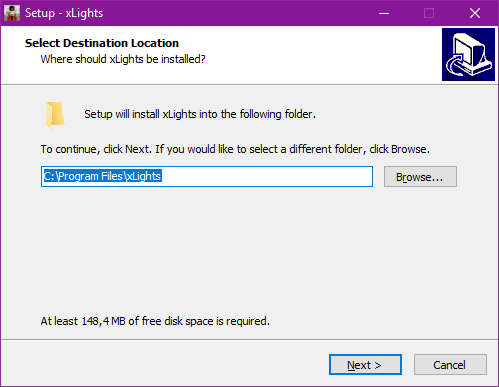 Just accept all default values and continue until it installs: 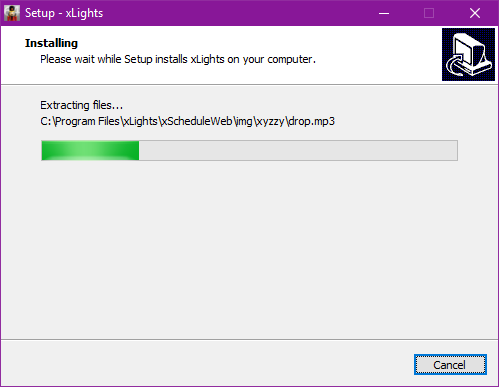 Once done, click you want to open the program and you should be greeted with the following screen: 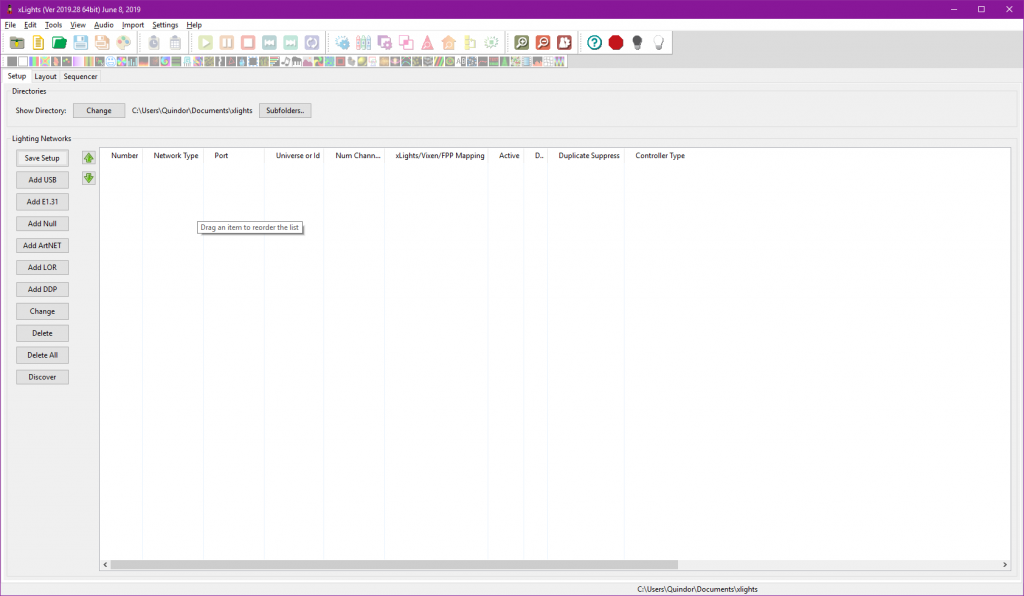 First we need to setup our QuinLED-Dig-Uno running the ESPpixelstick firmware within xlights. To do this, click “Add E1.31” and the following dialog should appear: 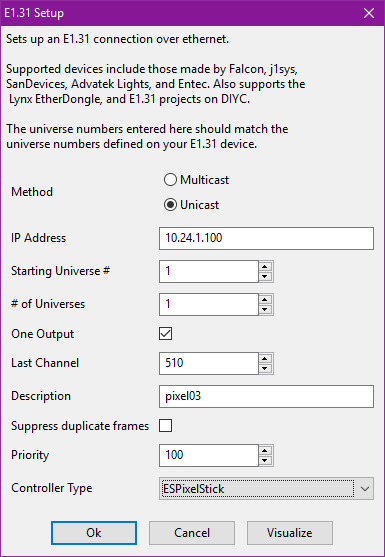 (My screenshot shows this window filled in with my data) Select “unicast” and fill in the IP address of the module we configured above. I also added a description and in the “controller type” pulldown menu I selected ESPpixelstick. Once done, click ok and hit the red “save setup” button! That’s enough for a basic configuration with 144 RGB Lights connected.

After telling xlights what kind of controller or controllers you are using you need to tell it what is connected to this controller. As we mentioned above we are using a 144LEDs/m LED strip (in my case a ws2815 12v variant) so we need to configure this as a simple line.

Go to the “layout” tab (top left) and draw a “single line” and draw it on the black surface on the right, you should end up with something like this: 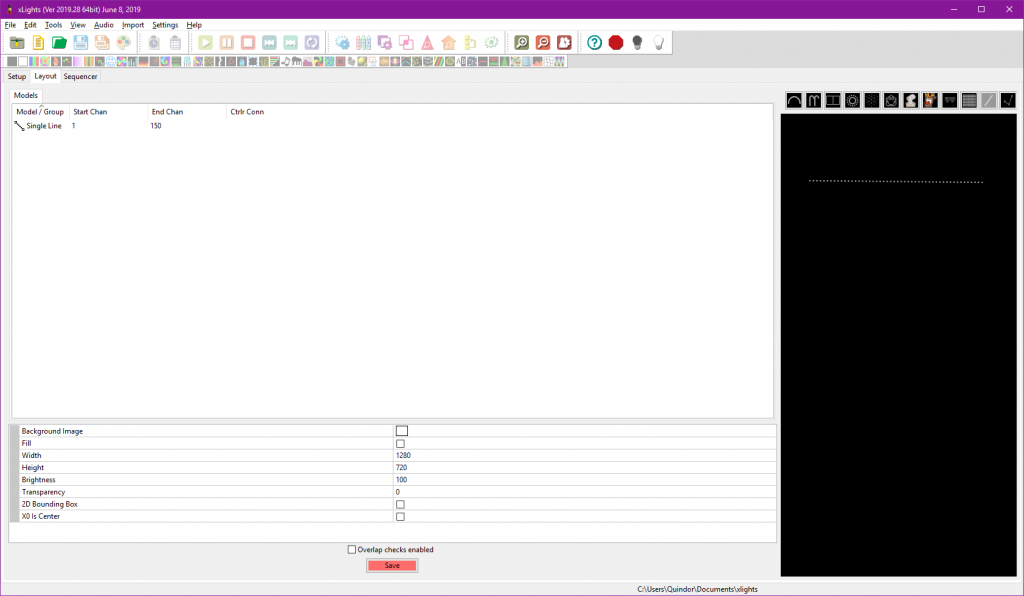 Click on the “single line” configuration item and fill in that you have “144” nodes in this line. Looking further we can see that the “String Type” is set to RGB. If the colors end up incorrect later on you can correct it here or in the ESPixelstick webpage. We don’t need to change any other settings so hit the red “Save” button in the bottom of the screen.

After that we can go to the next screen which is the sequencer screen: 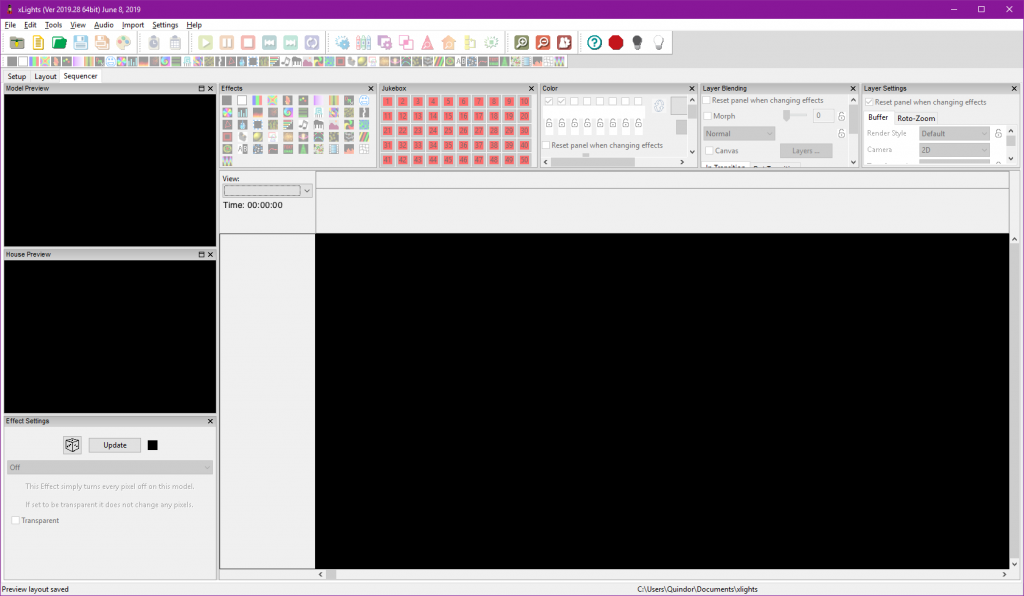 Here we are going to create a new sequence for our LED strip. To start off, click on the following icon in the top left corner:

This will take you to the new sequence wizard which should pop-up automatically with the following screen: 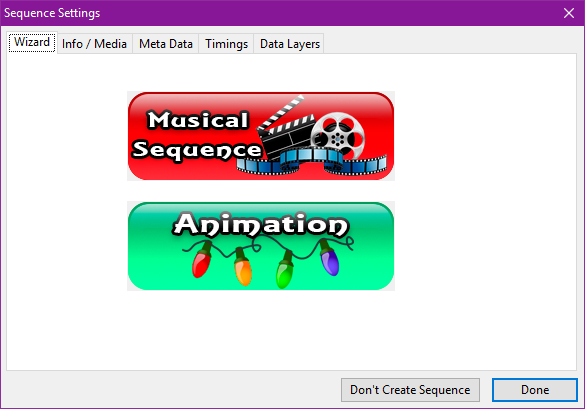 Here we are going to select “Animation” 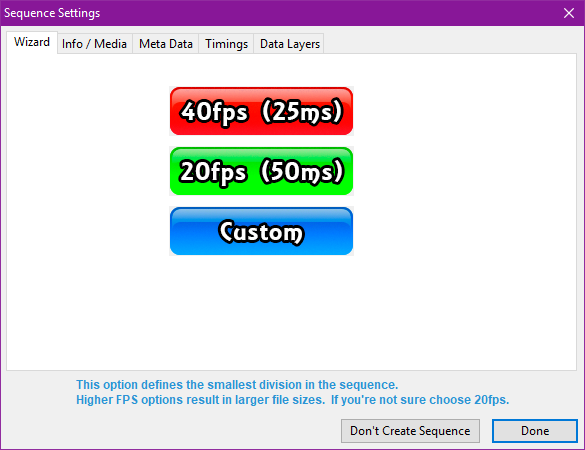 And set it to the lowest value possible which is 15 msec resulting in about 66.67 FPS which should be pretty good! 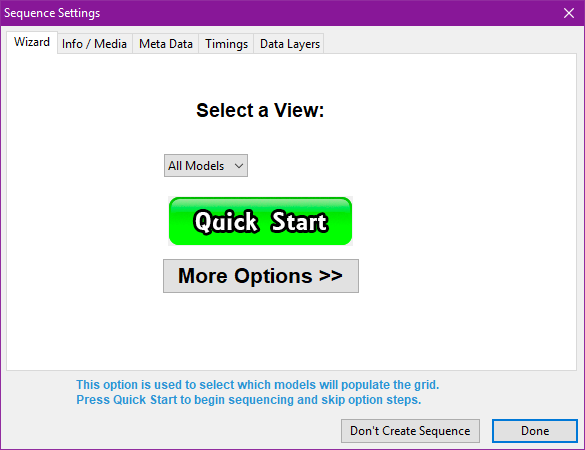 After this, hit “done” and you should be greeted with the following screen: 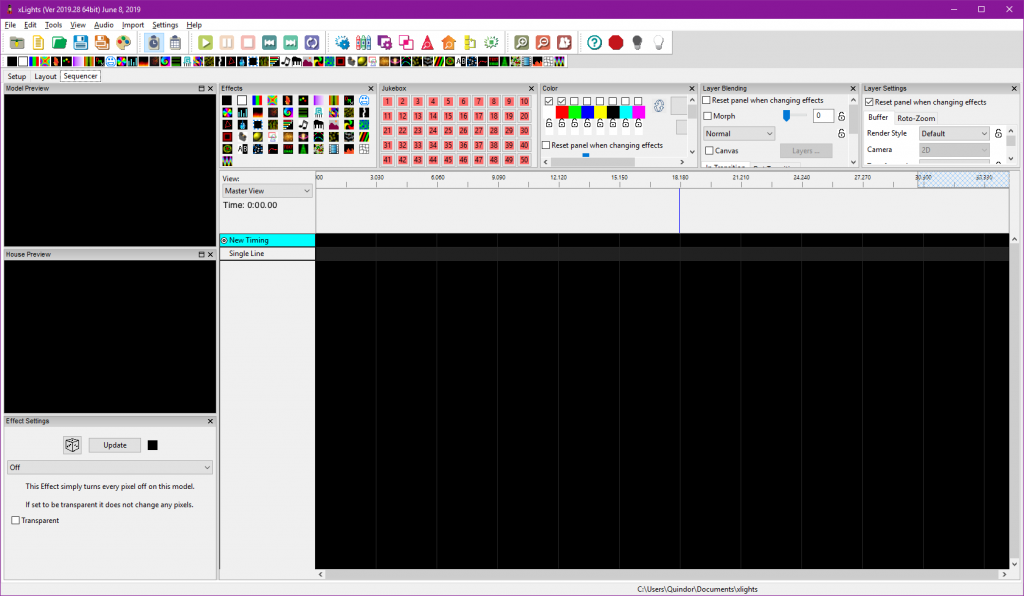 This is where the really fun part begins, now you can configure your lights to do anything you want! This is a bit much to cover in a tutorial so let’s look at a few simple examples!

A simple lighting pattern which still looks really nice is making some chasing lights. To do this, drag the blue/green/red effect onto the single line and drag it for the full 30 seconds this sequence is configured for by default: 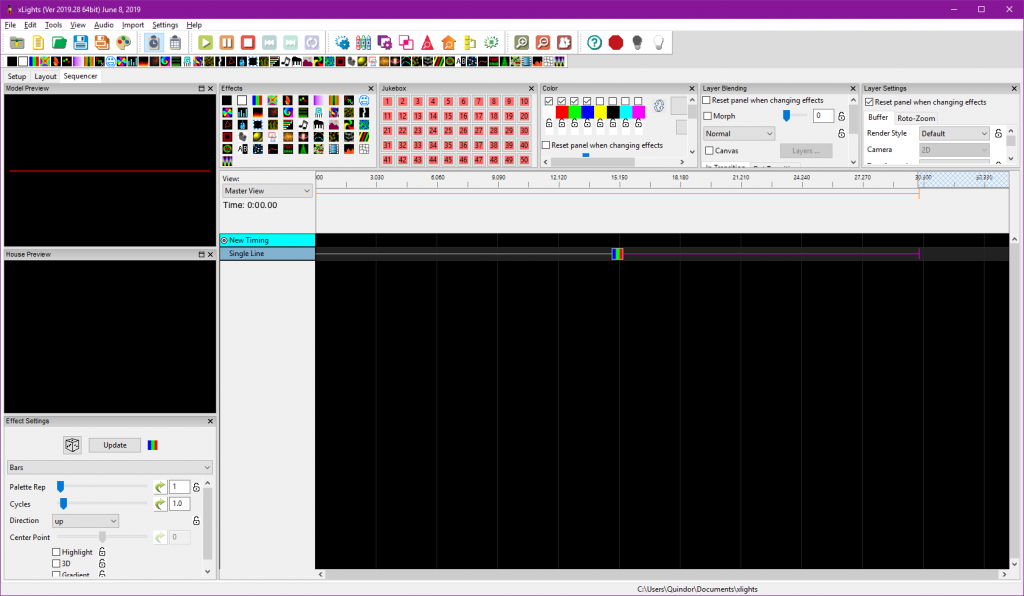 You still won’t see anything happening on your LED strip but once you hit the white lightbulb button in the top you are going to see a preview of the effect:

That’s all nice and all, but kind of boring, it’s just switching primary colors. To make it nicer, click on the effect properties in the bottom left and change it from “up”  to “right”. Now you should see the colors moving across the LED strip. To make this even nicer, let’s click on “3D” and ” Highlight”. Now the colors will fade off over the LED strip, but it all still looks kind of choppy. To fix that, up the amount of cycles using the slider to 6. Now you should see the pixels running over the LED strip fairly smoothly. Last I’m going to choose some custom colors, you can do that by clicking on the color you want to change in the top middle of the screen: 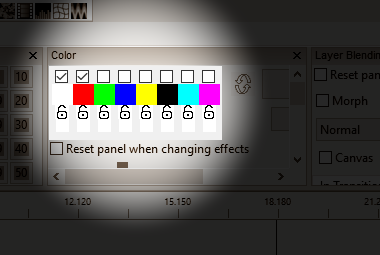 Once you are done you should see the following onscreen:

about something like the following preview (in your colors) on the LED strip:

Another effect I like is the “butterfly” effect. This slowly fades colors over the LED strip, blending them together seamlessly. After choosing your own colors it can look quite nice! This same effect could also be used to make the traditional “rainbow” effect you often see:

Another cool effect is the garlands effect, this adds up pixels one by one scrolling over the LED strip, here is the configuration used in the example video below:

Using xlights to control your LEDs is really powerful, you can quickly create beautiful looking effects and especially when combining multiple modules the possibilities are almost endless! Using one or more QuinLED-Dig-Uno’s makes it easy to use and hook up your LED strip, especially smaller strip you can just hook up using one of these connectors and you are done! Longer strips with more LEDs will need some special case but you can read about that in my pinout&wiring guide for the QuinLED-Dig-Uno.