This article is depreciated with the release of WLED 0.12

You can read more about using WLED 0.12 in this article

WLED supports the ESP32 out of the box but currently does not have official multi-channel output yet for the QuinLED-Dig-Quad. It’s on the roadmap to be incorporated into the 0.12.x release somewhere end Q4 2020!

Until then the multi-output of the QuinLED-Dig-Quad isn’t useless though, it kind of works in ESPhome already but since today there is a new option available. A few people have worked on a fork of WLED which kind of “hacks in” multi-output support in the current WLED 0.1x.x and it’s actually very workable already!

Please check out the Github for it here: https://github.com/peacepenguin/WLED

Before compiling please set the following in the NbpWrapper.h file:

To try and make this easier for people to use who don’t want to compile themselves I’ve created a pre-compiled binary you can just flash to your QuinLED-Dig-Quad. This has been pre-configured to 300LEDs per LED channel.

(Do not you NodeMCU PyFlasher or something else)

2020-12-20 – Updated version again, this time using the Multi-channel mod you can compile! The pre-compiled is set to 4 outputs with 300LEDs each again. I’ve also made the 1-3 and 3-1 versions again to change around LED2 and LED3, depending on the ESP32 board you have. Button to GPIO17 and Relay to GPIO19 (Q3) have been set too!

To use this, there are some rules after that:

!Sometimes when creating segments the intensity and/or speed of the effects can be set to 0 instead of 50%, but you can set it manually again per segment!

After this it works as 4 individual LED strips that you can set everything for individually by using segments!

If you want to use more LEDs then 300 per channel, you can do this but then you’ll have to custom compile a binary yourself like I mentioned above. 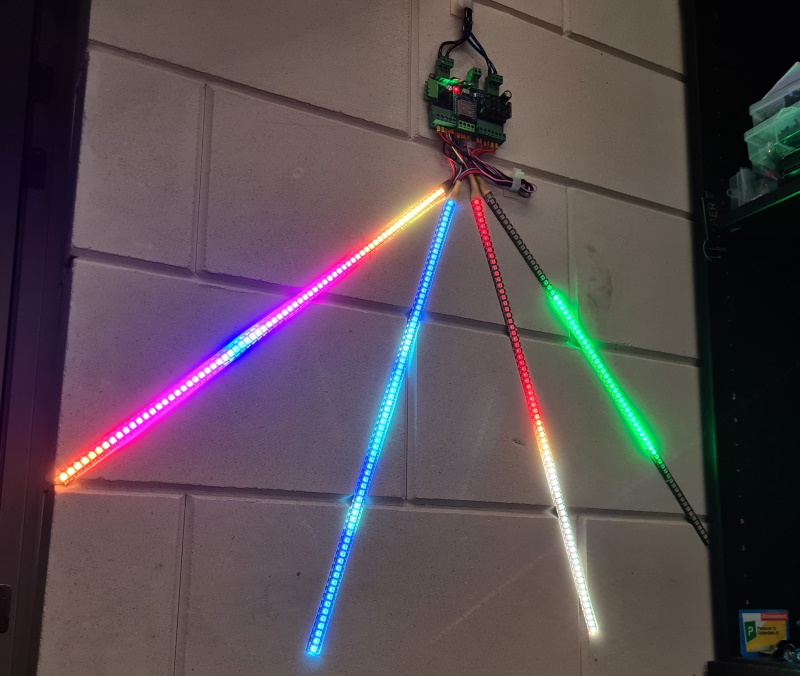 When DrZZs and I discovered this mod and started testing it we got so excited that we decided to do a livestream about it. It’s a bit long, but most discussed above is shown and explained!

This mod WLED also works with E1.31! Basically if you don’t use the segment feature mentioned above, WLED treats all the outputs together as one single big LED strip. So in the case of the “300” binary, this is 1200LEDs in total. Or you can custom compile the mod firmware to actually use the amounts per channel that you have.

If you are using the 300 firmware, you’ll have to do some math to setup all the lines to the correct starting channel inside of xLights. If you custom compile with the right amount of LEDs you can just say that it starts at the end of the previous one and it should work automatically.